In the early part of the 17th century, the Dukes of Joyeuse held in veneration a modest-sized statue of the Blessed Virgin Mary entitled Our Lady of Peace. The family agreed that the person among them showing the most sincere devotion to Our Lady should hold custody of the statue. When a member of the family joined the Order of Friars Minor, Capuchin (Franciscans), the statue was placed in the entryway niche of the Capuchin monastery of Paris. The year was 1630.

The memoirs of the time indicate that for several years the statue was surrounded by brilliant light during the night. The statue attracted vast crowds, including pilgrimages to the statue and public prayers. Sick people are reported to have been miraculously cured there.

The original statue of Our Lady of Peace is about two feet in height. In her right hand, the Virgin holds a long and fruitful olive branch of peace. On her left arm she holds her son. The child Jesus holds an orb – the blue planet – in his left hand and a little cross in his right. He gazes upon the cross in his right hand, which proclaims both his suffering and his triumph, even as he gazes beyond it toward the olive branch of peace in his mother’s right hand.

The postures of Mother and Son are eloquent. They proclaim to us: if you want peace (the olive branch), then work for justice (the cross). If you want serenity and tranquility in God, then order your relationships rightly for the sake of building up the common good. 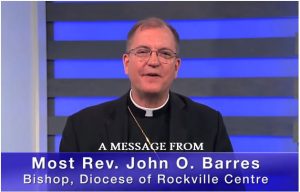